Aikido is the art of gathering and combining forces.

Originally, the art of AIKI (AIKI NO Jutsu) was a strategic and spiritual fighting system of samourai. In the beginning of the 17th century with the Tokugawa period, more emphasis was put on the 'Do' philosophy instead of the "Jutsu". This corresponded to the environement's change which began to be more peaceful.

Aikido techniques (waza) are classified in basics (Kihon waza), variations (Henka waza) and old techniques, coming from battelfields (Koryu waza) and for which high control and concentration are required. 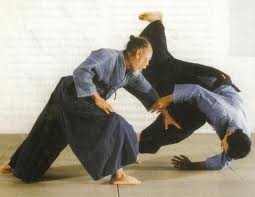